In 1918 Wykeham Hall was requisitioned by the Admiralty for use by the Royal Naval Air Service and renamed HMS Daedalus.The main building being used as the Headquarters and Officers Mess.

Wykeham school  moved to the opposite side of the airfield to Seafield Park and the school was renamed.

1872 - Sir Henry Sykes built a large Victorian mansion on 83 acres of land at Hill Head and called it Seafield Park.

1890 - Seafield Park registered for scholastic purposes under the Rev.Pain and the Rev. Courtney Spencer Foster.

1903 - Ownership transferred to William Hoare and the school changed to an engineering establishment under Herbert Meredyth Mansell-Jones Esq.

.................." Seafield Park Engineering College, Crofton-on-the-Solent, Fareham, Hants. A residential college, specially equipped for preparing the sons of the directing classes for the profession of an Engineer, and for giving a Mathmatical, Mechanical and Practical Education."..................The Master of Seafield W.Arthur Rix , M.A. (Cantab). Before they became famous in the world of aeronautics Sir Tommy Sopwith and Lord Brabazon were amongst the students. 1910 - Still under the ownership of the Agnews, the school was converted back to a Boys Preparatory school ; Headmaster W.A.Rix M.A. (Cantab).

1919 - Rix declared Bankrupt, the school still owned by the Agnews, was then leased to Ernest William Webb who moved his school from Wykeham Hall to Seafield Park .

On the outbreak of World War II, the Admiralty requisitioned  Seafield Park  for use as an overspill barracks and Signal school. The school once again was forced to move this time to Endsleigh house, Milton Abbott, Nr. Tavistock.

Endsleigh was the Summer, holiday home of the Duke of Bedford.

The first stone was laid at Endsleigh in 1810 by Georgina, Duchess of Bedford and her three eldest sons.  The Bedford family owned a third of Devon and decided that this was the prettiest place in the County to build their house.  Endsleigh was designed by Sir Jeffrey Wyattville as a cottage orne´.

The family used it as a shooting and fishing Lodge; they opened it just once a year when they arrived with servants, children, silver and animals in tow.  Georgina was a passionate gardener and lover of the outdoors.  Humphrey Repton created an outstanding garden for her. The above picture was taken from Humphrey Repton's Red book, which he used for planning the gardens.  Further pictures from the Red book appear in the photos section - PG 1. (Provided by Colin Browning)

On the conclusion of World War II the Admiralty retained Seafield Park for naval use and the Duke of Bedford  re-possessed his country home so by necessity the school was again moved, this time to Newells, Lower Beeding, Nr Horsham, Sussex in 1946.. Map of the Newells estate.

Showing the house, stables, kitchen gardens, the positioning of the terraces , the reservoir ( Swimming pool) and the Gravel pits (.22 range).

The house at Newells was built to the designs of M. Digby-Wyatt in ca. 1869. During World War 2 it had been taken over by the Ministry of Defence and was the headquarters for a Canadian Division, prior to the Invasion of Normandy.

Captain Peter Hope-Lang  (b. January 1910; d. September 1970) took over from Mr Ernest Webb as Headmaster.  At this time the name of the school changed from Seafield Park to Newells but retained the original school crest. 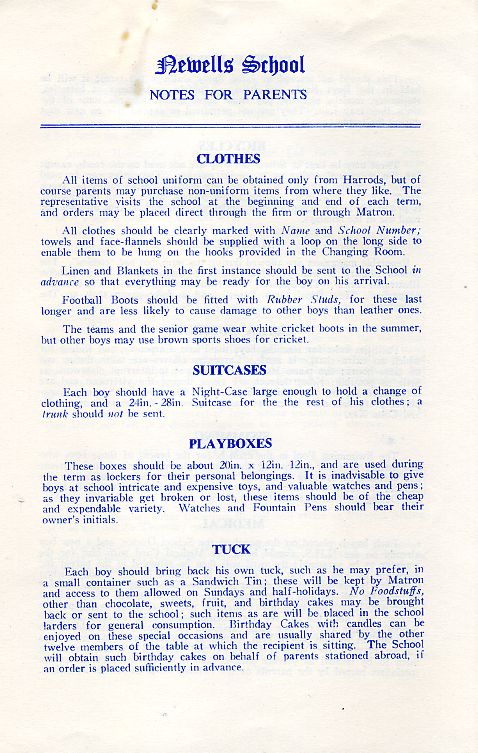 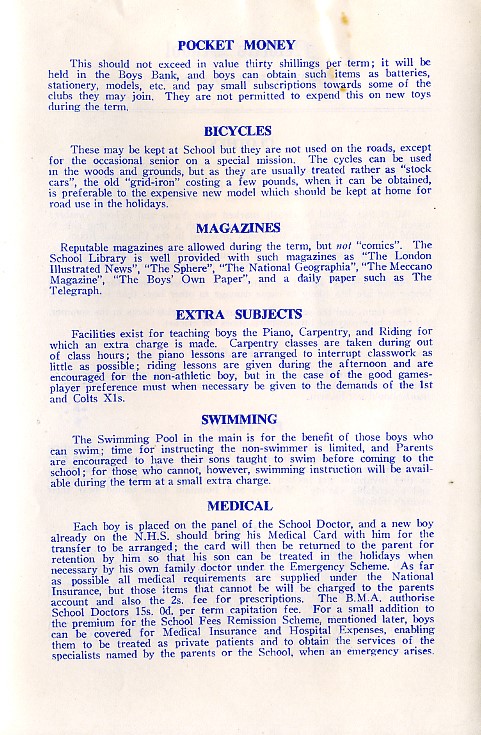 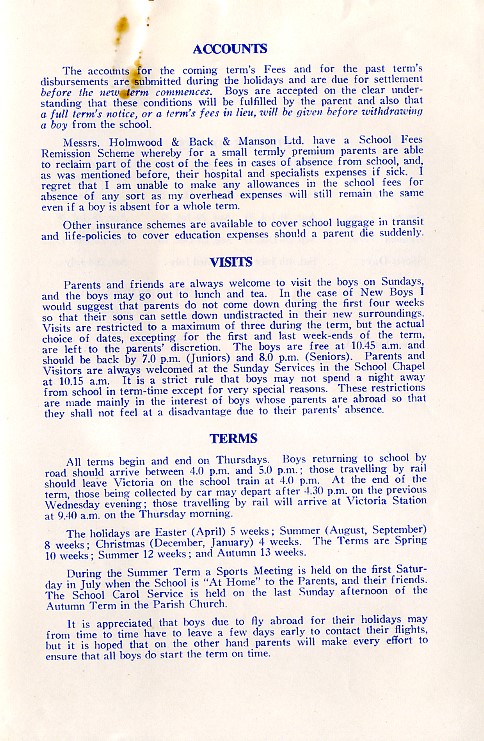 The number of boys at the school at any one time was about 60 - 80. They were originally divided up into three houses : Normans, Saxons and Britons; a fourth house, Vikings, was added later when the number of pupils had increased. The dormitories were named after historical figures from English history : Nelson, Winston, Clive, Wellington, Lister, Gordon, Jenner, Drake, Hillary, Tensing.

Sports : Cricket, Tennis & Athletics in the Summer, Football (Soccer), Rugby and Hockey in the Winter and Spring. The First, Second and Under Eleven teams in all these Sports  also represented Newells against other Preparatory schools in the vicinity ( Ashfold, Cottesmoore, Desmoor etc).  An Open day for parents combined with Sports day was held every Summer, with prizes being awarded outside the Cricket pavillion. The First XI cricket also took on a Father's team . One afternoon a week was devoted to maintenance of the gardens and grounds, supervised by the Head gardiner - Mr Caffyn. Outside the normal school curriculum , Carpentry was taught by Col. Wreford, Music by Mrs Lang and Mrs Hare and horse riding by Mrs Gamon.  The school choir competed successfully in local  Choir festivals and competitions.    There was also a Boy Scout/Cubs troop which was run on its formation, by Maj. Gamon, Mr Mansfield and  Mr Jee.  Occasionally, in the Summer holidays, Scout Camps were organised .  They took place,  in the period up to 1951, at Petworth House, Sussex;  Osborne House , Isle of Wight and Robin Hoods Bay, Yorks.

On Saturday evenings films were shown in the games/recreation room, which was also used as a theatre for performances by magicians, local musicians ( e.g.Bell ringers),professional puppeteers and for school plays. A small theatre was later established in the stables block where performances for puppets , with the pupils as puppeteers, were arranged.

Newells remained and flourished at Lower Beeding , until in 1968 a disastrous fire destroyed a major part of the school buildings and tragically a pupil ( Alexander.D.Parker, aged 13) lost his life.(See : In Memoriam).

At the time of the fire, Mr Lang held Newells on a 21 year lease from the Scrase-Dickens family, who resided at Newells Farm.

The Staff and pupils were relocated to Handcross Park , Haywards Heath, West Sussex and were amalgamated with Desmoor school on a temporary basis. The above photo of Handcross Park house was taken in approximately 1920. This house burned Down in 1935 and was rebuilt as the present Handcross Park house. This was then the Third house on the site and provided a residence for a Colonel and Mrs J R Warren, before they moved to the Hyde estate. After that the house was home to the Canadian Army during World War two, an old Peoples home, and lastly Three Schools . Whittingeham College, Newells and Desmoor and finally Handcross Park School.

Desmoor, in memory of Desmond Moore, the son of an early benefactress, was founded at Ewhurst ,Surrey, in 1946, by the Hon.Mrs Henrietta Franklin C.B.E., who was for many years Hon.General Secretary of the Parents National Education Union. It was eventually decided that the amalagmation would be permanent and the two schools, Newells and Desmoor, were to remain at Handcross Park and the name be changed to the present day  Handcross park school.

The name Newells entered the history books, however the 1940 Seafield Park and Newells crest was adopted by and is still in use at Handcross park.

In 2019 Handcross Park school was awarded the title of Prep school of the year.

My thanks to Robert Johnstone for the following information :

The Scrase - Dickens family had built the house (which the school later occupied) in the 1860's, and had set about landscaping the grounds (including the azalea walk which was part of the 60 acres within the school's boundary fence) - like the Loder family at Leonardslee (now closed to the public) and at Wakehurst

and the article about the architect for the house

PS: 1) APPOINTMENT OF DEPUTY LIEUTENANTS BY THE LORD-LIEUTENANT OF WEST SUSSEX

Press Release 21 September 2004: Major Mark Scrase-Dickins, CMG was, last year, High Sheriff of West Sussex. Educated at Eton College and the Royal Military Academy, Sandhurst, he served for a number of years with HM Forces before joining the Diplomatic Service, from which he retired in 1991. In addition to being Patron of a number of West Sussex charities he is the Deputy President of the Sussex Branch of St John Ambulance. He is also the Chairman of the Management Board of the West Sussex Public Service Agreement. Married to Tina, the couple have two adult children.

2) More about S-D forebears and Coolhurst